The latest Irelandoffline Quarterly report, based as always on Ookla Netindex Data shows Broadband Speeds in Ireland are improving but only at a glacial rate in the last quarter and with a marginal relative drop in download speeds against our EU competitor countries.

The large speed increases during Q2 by both eircom and UPC restored our relative position in the EU back to where it was in May 2010 but these speed increases tapered out of the statistics during Q3 2011 with eircom showing a drop in download speed and with the improvement against our EU Competitors largely stalling. Upload speeds have improved, largely driven by cable. 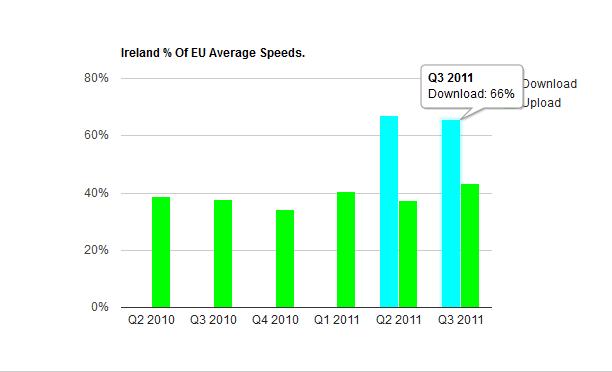 The gap between UPC and eircom continues to grow. The average UPC customer enjoyed three times the speed of the average eircom customer in Q4 2010 and the performance gap in Q3 2011 is now nearly four times more. This improvement in cable broadband speeds keeps Ireland largely static in the international tables instead of falling back as expected.

Average eircom speeds dropped nationally from 4.59mbits in June to 4.57mbits in September as the rollout of their ‘next generation’ broadband slowed down dramatically. eircom did improve their speed performance in Galway Limerick and Waterford but were only up a meagre 0.01 Mbits in Dublin and dropped slightly in Cork City. 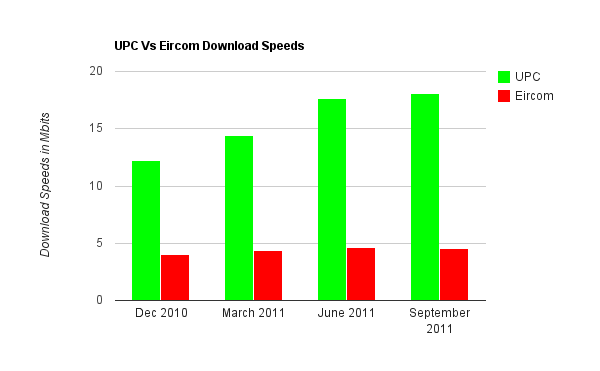 .
The notable trend continues whereby recently cabled towns, typically towns with populations between 10,000 and 30,000 are now enjoying significantly faster speeds than any our main cities and employment centres nowadays.

The fastest speeds in Ireland are in Dungarvan County Waterford where the local cable ISP, Casey Cablevision, now deliver average speeds of 24.3mbits. In second place nationally is Swords Co. Dublin on 16.35mbits and Athlone has dropped to third on 14.58 mbits up from 13.08mbits in Q2.

None of the 5 biggest cities are among the 10 Fastest Towns in Ireland.Dublin in 12th place is the top City with speeds of 10.57mbits on average. 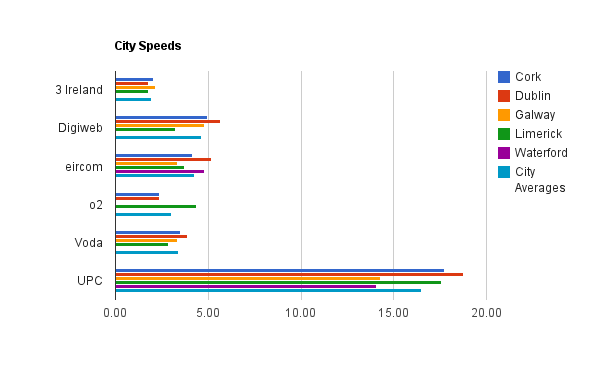 Average UPC Speeds in Cork are over four times higher than average eircom speeds and are 4.7 times faster in Limerick.

This gap has developed significantly over the course of 2011 . 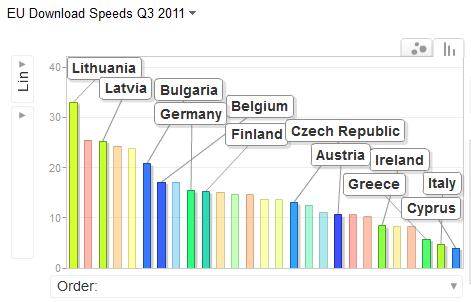 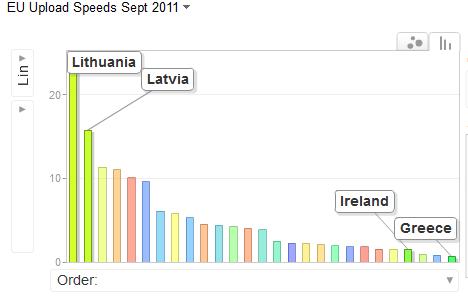 Click on an INDIVIDUAL country inside a listing for City and ISP Statistics.