“Broadband is shifting to FTTP and disaggregated wholesale and retail; cablecos cannot afford to hang about.”

Virgin Media O2 (VMO2) announced, in July 2021, that it will upgrade all 14.3 million homes that are currently passed by HFC to FTTP by 2028, adding to the 1.2 million recently built homes passed. The technology used will be XGS-PON. This is the largest HFC-to-FTTP network migration to have been announced anywhere in the world. In this article, we discuss the rationale behind the migration, the implications for the market in the UK and the broader implications for cable operators worldwide.

The upgrade is surprisingly inexpensive

Virgin Media’s merger with O2 created an opportunity to increase the broadband service penetration of its current network, but the combined entity VMO2 now faces stiffer challenges from Openreach and altnets.

Total cost of ownership (TCO) is the main driver of the upgrade to FTTP. VMO2 indicated surprisingly low capex per premises passed (GBP100 (USD135)) for FTTP compared to that for DOCSIS4.0 (GBP60 (USD81)). This is the benefit of having access to ducts and a network that is already quite fibre-deep. Indeed, without ducts, capex per premises passed can be as much as five times higher. The low figure given by VMO2 could also indicate that more of the capex will fall to customer connections rather than passing the premises themselves. VMO2 gave few indications of how it would manage customer connections and technology migration.

VMO2 also claimed that the opex for FTTP would be lower than that for HFC. We estimate that cablecos could save around USD30 per year per home passed (so about USD75 per year per home connected if the network is 40% utilised), which would go some way to covering connection capex.

VMO2 indicated that the switch to FTTP would offer:

Parent company Liberty Global had already signalled that this upgrade was possible in June 2021, so the announcement is not a huge surprise. The plan will have a different impact on each type of infrastructure player.

The broader outlook is that two main players are likely to take control of a large portion of the wholesale broadband market in the UK. Consolidation among altnets is likely. M&A may not be the most efficient means to achieve this; sharing a virtualised connectivity platform might be simpler.

All cablecos know that a shift to FTTP is inevitable at some point; it is simple a matter of when and how. We can divide cablecos into the following two groups (see Figure 1).

Figure 1: Overview of the two main options for cablecos 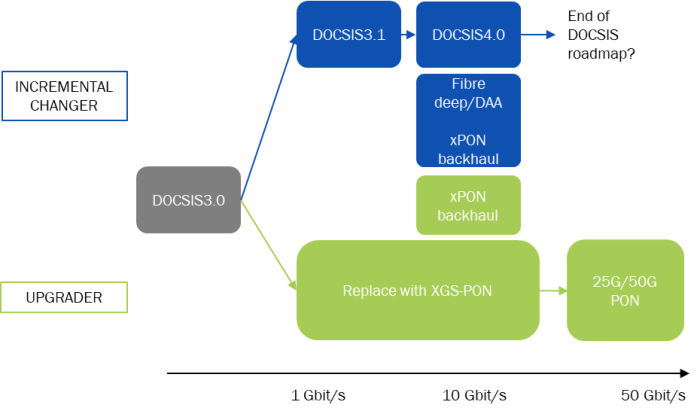 Network opex will be lower for FTTP than for HFC because there are fewer active parts to maintain. The savings could be in the region of USD30 per year per home passed (so USD75 per home connected if the network is 40% utilised).1 This would go some way to covering connection costs, which would be intolerably high for end users if charged at cost. However, this saving can only be realised when operators remove the fixed costs associated with HFC.

The upgrade looks as if it will lead to a shift to wholesale access. Most other upgraders have indicated some sort of shift away from the standard cable vertically integrated model. Operators should see a better return on some sort of multiple-tenancy model, provided that they have other means (such as FMC bundling) to keep their retail churn low. DOCSIS can address most of the current needs of retail end users. However, wholesale DOCSIS has little chance of being selected ahead of operator FTTP (except, perhaps, as a short-term fix prior to an upgrade) among service providers looking for a long-term partner. In addition to broadband, access fibre can be used for small-cell x-haul and edge; DOCSIS is a non-starter as a competitor in this space.

Many operators now have ambitious FTTP plans. Cablecos cannot afford to hang around, especially if they have that critical asset: access to physical infrastructure.