Irelandoffline Demands Immediate Restatement of Deliberate 3G Coverage Misinformation Supplied by Comreg to EU for the years 2009 and 2010.

Irelandoffline has analysed the data provided by National Regulators to the EU in respect of the EU Digital Agenda ( i2010) and we will be publishing our greatly expanded BB Speedtest quarterly report in time for the 1st EU Digital Assembly meeting in less than a fortnight.

The most important data is the Coverage data. We looked at three key measures which are:

On measures 1 and 2 we are broadly in agreement with the data supplied by Comreg to the EU.

However on the 3G coverage measure it is obvious that Comreg are making up numbers and simply lying to the EU. Put it another way the remaining 0.5% of the population, allegedly with no 3G coverage, amounts to around around 1/10th of the population of County Galway left with no usable signal and with every other nook and cranny in the state fully covered.

Anybody unlucky enough to travel the length and breath of Ireland looking for a 3G signal knows that finding a usable one is almost a random chance. The nature of 3G technology, particularly the fact that coverage shrinks as more users enter a cell, determines the users outcome. A regulator must predict real life coverage based on usage assumptions not on empty networks.

First of all the real figure is that around 80% of the population can access a usable 3G signal most of the time after the National Broadband Scheme Rollout, that is today in 2011.

Secondly the fact that the figure was allegedly 99.5% in 2009 (3) and 99.5% in 2010 (4) logically means that National Broadband Scheme rollouts during 2010 MADE NO DIFFERENCE AT ALL according to Comreg. And yet we know the rollouts made some difference in some parts of Rural Ireland during 2010.

Comreg must learn to stop lying to the EU and to the OECD. They are diminishing the reputational capital of the Irish state, and its people with these outrageous figures.

Irelandoffline are currently estimating the correct 3G population coverage figures for both 2010 and 2009 and we will be submitting them to the EU in time for the “1st EU Digital Assembly” Summit on the 16th and 17th of June. We will ask the EU for forgiveness on behalf of Comreg and we will try very hard to get his copy to Minister Rabbitte a day early so that he has some light airport reading to hand.
Comreg require us to believe that Holland, a rich, advanced and very flat country which is ideal for any form of wireless technology had less population coverage than Ireland in both 2009 and 2010. We in Irelandoffline simply don’t believe that, neither did the Dutch when we asked them about these figures. 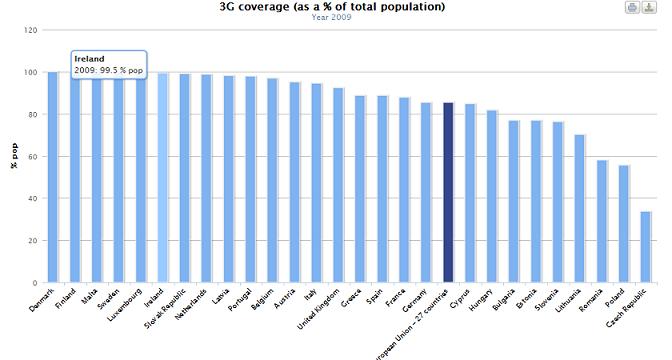 And why did the NBS rollout not increase the figure in 2010 ? (After all an 0.1% extra population coverage means 4500 more people in Ireland could get a signal in 2010) 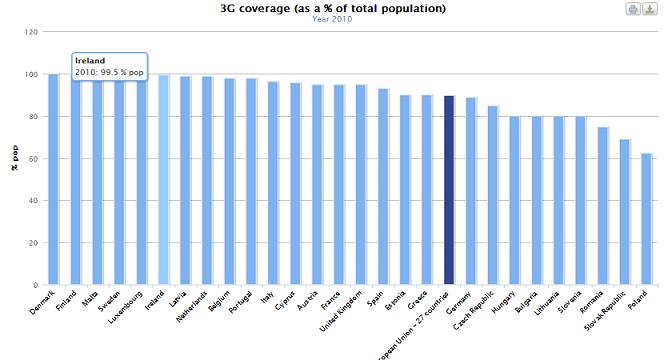